College constitutes a significant expense, and scholarships can lighten the load, making it easier for you to pay for your education while studying what you love the most. Many music scholarships require you major in music while you're in college, but others let you use your music skills to mitigate college costs regardless of your major.

Music scholarships are available for students with many musical interests and aspirations. Scholarships can be administered through a variety of organizations, including corporations and nonprofit foundations. Some awards are open to students all over the country while others are available to students who live in specific regions.

The Broadcast Music Incorporated (BMI) Foundation works to hone people's talents and enhance their prospects for creating and performing music by providing programs and scholarships to assist young musicians in their musical aspirations. The following scholarships are a sample of awards offered by the foundation:

The Glenn Miller Birthplace Society, established in 1977 to honor Glenn Miller and his music, annually provides a total of six scholarships: three awards in the amounts of $3,000, $2,000, and $1,000 to vocalists, and three awards in the same amounts to instrumentalists. The awards are intended to support talented students in their educational goals so they can make substantial future contributions to the field of music. To be eligible, you must be either a high school senior or a first-year college student, and you must major in music. You'll need to download and complete the application form found on the scholarship page, submit an audition CD of your work, and write a statement describing your musical intentions for the future.

The Jack Kent Cooke Young Artist Award is made possible by From the Top, which got its start in 1995 as a radio show and seeks to help young people contribute to the field of classical music. The Jack Kent Cooke Young Artist Award makes available $10,000 to 20 young classical musicians to offset the cost of a classical music education. Applicants must demonstrate financial need and superb musical skills and be willing to perform on National Public Radio (NPR). Composers, instrumentalists, and singers from the age of eight to eighteen are eligible for the award and are invited to apply online.

The James and Virginia M. Smyth Scholarship Fund is made possible by the Community Foundation for Greater Atlanta. The fund awards $2,000 to twelve to fifteen deserving recipients each year, and each award is renewable for four years. To be eligible for the scholarship, you must major in music or a related field in the arts and sciences, and you must demonstrate a spirit of community service. You need to have been accepted to a regionally accredited college or university. Awards are preferentially given to residents of Georgia, Tennessee, Texas, Oklahoma, Mississippi, Missouri, and Illinois. Online applications are available following the month of December each year.

Sponsored by the UNCF, the Janet Jackson/Rhythm Nation Scholarship is available to African-American students who are majoring in music or related fields such as communications, journalism, photography, or broadcasting. Awards are presented in the amount of $5,000. To be eligible, students must attend one of the 37 UNCF-affiliated, historically black colleges and universities, maintain a minimum 2.5-grade-point average, and devote their talents in a meaningful way to community service. To be considered for the scholarship, applicants must apply online and submit an essay.

The John Philip Sousa Foundation provides a scholarship award of $1,000 to a high school senior who is active in orchestra or band. The student must intend to major in music in college, and in addition to the cash prize, she will have the opportunity to perform with a major military or college band. To apply, you'll need to download and complete an application and pay a $25 fee. You'll also need to create a video of yourself performing two movements of a concerto with piano accompaniment and upload it to YouTube for consideration. If you don't want to use YouTube, you could create a DVD of your performance and mail it to the Coordinating Chair at the address listed on the application.

The Chorister's Guild, an organization dedicated to excellence in church choral music, administers the Ruth K. Jacobs Memorial Scholarship, which awards up to $1,500 a year to students who show talent and promise in the field of church music. Applicants must be enrolled full-time at a college or university, majoring in music, and in their junior or senior year. Scholarships are renewable for the following year at the inclination of the Scholarship Committee. To apply for the award, you must complete the online application, submit official transcripts from all the colleges you have attended, and provide four references, including those from a music professor, an ordained minister, a church musician, and a personal reference.

The Sphinx Competition isn't a traditional scholarship, but it offers substantial awards and exposure to talented black and Latino string players each year. Sponsored by the DTE Energy Foundation, the Sphinx Competition is open to musicians who play the cello, viola, violin, or double bass. As part of the competition, entrants participate in master classes and workshops that further enrich their music skills and education. To enter the competition, you'll need to put in an online application and submit a video audition, a list of your repertoire, a biography, and a photograph.

VSA, an arts and disability organization, is part of the John F. Kennedy Center for the Performing Arts. Every year, VSA presents the International Young Soloists Award Program, which awards a $2,000 prize and the opportunity to perform at Kennedy Center. The competition is open to soloists and instrumentalists who play in any musical genre. Applicants must have a disability and be between 14 and 25 years old. To apply, you'll need to fill out the online application and submit three files of your musical work, in either video or audio format. The program is open to United States citizens as well as noncitizens who are in the U.S. on student visas.

If you know which college or university you want to attend, you'll want to check out the music scholarships they offer. Top-notch music schools award scholarships based on merit, need, or both. The amounts awarded in these scholarships tend to vary, depending on each student and her particular interests, needs, and situation. 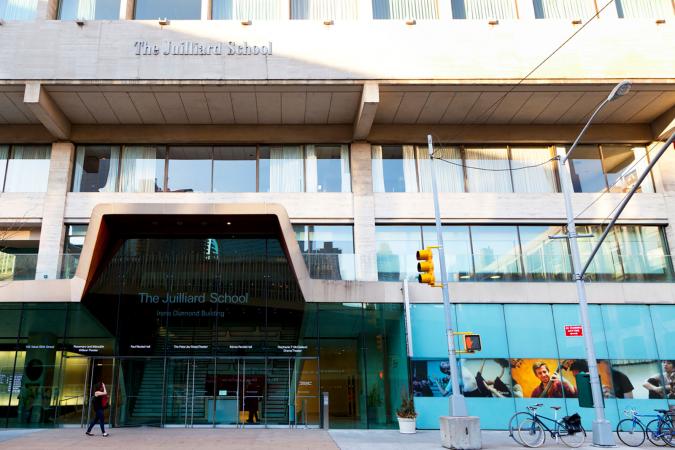 At Juilliard, the Scholarship Committee evaluates your eligibility for a music scholarship once you've been admitted to the school. Your eligibility depends on a combination of your financial need and your musical promise. With regard to financial need, the committee looks at information from your FAFSA (Free Application for Federal Student Aid) as well as unique circumstances particular to your situation. With regard to musical promise, the committee looks at your entrance audition and academic potential. Scholarships are renewable each year as long as you reapply in a timely fashion and maintain satisfactory progress with regard to your studies.

Berklee offers a variety of merit-based scholarships. When students are admitted, they're automatically put into consideration for most of the scholarships on the basis of their auditions and their interviews. Most Berklee scholarships pay partial tuition, but the Presidential Scholarship, a prestigious award given to only seven entering students, covers many of the major costs of attending the college, including tuition, housing, and a laptop computer.

At the San Francisco Conservatory of Music, scholarships are awarded to students on the basis of musical merit, financial need, and the particular musical needs of the conservatory. To be eligible for scholarships at the San Francisco Conservatory of Music, you need to be a full-time student. You remain eligible for your scholarship for the duration of the four years you will take to earn an undergraduate degree, but if you require an extra year to finish your degree, you must contact the Scholarship Committee. For need-based scholarships, you must submit the FAFSA, but for merit-based scholarships, all you need to do is to fill out SFCM's Scholarship and Financial Aid Application.

Eastman School of Music awards scholarships to all undergraduate students who are admitted and these awards are based on merit, financial need, or a combination of both. The Howard Hanson Scholarship is awarded on the basis of merit, including both musical and academic promise. Some students receive Dean's Performance Awards or Dean's Scholar Awards, based on recognition of exceptional talent. The amount you receive will stay consistent from year to year, lasting four years for an undergraduate degree and five years for a dual degree.

Since most young musicians have put in years of practice before heading off to college, winning a scholarship is a meaningful validation of hard work and talent. A scholarship provides a great launchpad, boosting your confidence and giving you financial assistance to help you move toward a rewarding musical career.