College dudes are into having fun, studying, dating, and generally making the most of their undergrad experiences. Sometimes guys in college are pigeonholed into categories that they don't always fit, such as the heavy drinkers in fraternities or the nerds who spend their weekends at LAN parties and study sessions. In reality, though, the pool of college men is too varied for generalization, and it's easier for college-aged guys to escape stereotypes than it would have been in high school.

College is an ideal time for guys to learn more about their interests and personalities. High school provides a lot of obstacles to growing, improving self-confidence and finding acceptance, but the environment at many colleges and universities has the opposite effect. Professors, fellow students, and other community members tend to be supportive of developing and nurturing a self-identity.

One reason why it's easier for men to explore and define their own identities and personalities in college is because it's a time of great independence. For many guys, college is the first time in their lives that their decisions and actions aren't being regulated or judged by other people (with the exception of roommates and fellow students). Guys are free to meet the people they want, take the classes that interest them most, and try activities they've never done before. For some, that degree of freedom is initially overwhelming and can even be harmful. For others, however, it's a very good opportunity to gain maturity and confidence. 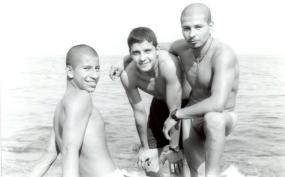 With the increased amount of freedom they have during college, especially in the first year or two, the majority of college guys develop an interest in regularly drinking, dating, or playing league sports. If you're looking for a friend or a date who isn't into these activities, however, don't worry. There are plenty of college guys who fall outside the norm and spend their time doing other things, too.

College dudes can get very involved in a campus's alcohol culture, especially if they didn't have the opportunity to drink while they were in high school. Since underage drinking is so prevalent on college campuses and the penalties aren't often very harsh if a student under 21 is caught drinking, it's normal for guys in their first and second years of undergrad to drink often, up to several times per week. Drinking can become a serious issue for some guys, particularly if they're doing so to join a fraternity or if they aren't familiar with their own alcohol limits. Binge drinking and alcohol poisoning have the potential to cause blackouts, brain damage, and even death, so it's important that college guys are mindful of smart partying behaviors and that they watch themselves and their peers for signs of drinking to the point of harm.

College dating is radically different from dating in high school, and many guys view the process as a chance to experiment. Though there are plenty of men who are interested in forming serious, long-term relationships, it's more common during undergrad years to find guys who want to have a good time or get to know a lot of different girls. Part of the reason why it's unlikely to find a guy who's ready for a serious relationship in the first part of college is because almost every incoming freshman's dating experience is limited. It can take a lot of time for a guy to figure out what he wants in a relationship and in a partner, and the natural way to do that is to try dating (or hooking up with, as the case may be) many different types of girls.

Playing sports offers college guys a chance to bond, form new friendships, share a mutual interest, and support one another. For men who have sports scholarships or play in prestigious division leagues, sports can be particularly important. It's natural for athletically talented guys to want to devote a lot of time to their sport during college, but it's also important for those guys to be aware of the other opportunities, classes, and friendships which they may miss out on if they choose to invest so heavily in sports.

With all generalizations aside, it's a huge challenge to define college dudes. They're an extremely varied, talented, and interesting bunch, and it's only fair to avoid grouping them into categories and instead let them define themselves as they see fit.